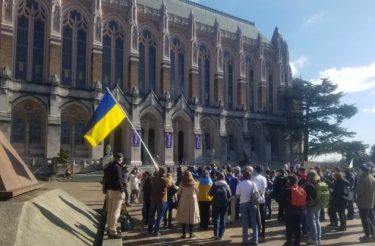 "The images of terror and stories of human suffering as the Ukrainian people face the onslaught of the Russian military invasion of their country are heartbreaking. This unprovoked attack has rightfully been condemned by leaders around the world and I join them in expressing my outrage at this assault. We stand with the people of Ukraine, including Ukrainian students, scholars and community members at the UW. Please hold them in your hearts as they and their families face a terrible situation. We must also take care to not let the actions of Russia’s authoritarian government affect our treatment of Russian students, scholars and community members who have no role in its policies.

Our Office of Student Life has reached out directly to students from the affected area, but this invasion and the threats being made by Russia’s leadership understandably inspire fear even for those of us who don’t have friends or loved ones in harm’s way. There are resources in the sidebar if you need someone to talk to. The Combined Fund Drive has also identified charities supporting the Ukrainian people.

Misinformation and disinformation are part of this assault and Prof. Kate Starbird from Human Centered Design and Engineering and the Center for an Informed Public has offered tips for how to avoid accidentally supporting this sort of information warfare. UW scholars, such as Prof. Scott Radnitz in the Jackson School of International Studies, are also sharing their expertise as part of our University’s mission of helping people better understand our world.

The Russian government’s attack on the democratic nation of Ukraine is the most violent and direct example of what has become a much broader assault on democracy and democratic norms in many parts of the world. Authoritarian governments and movements around the world have been cracking down on dissent, limiting the free expression of ideas and the rights of their people to pursue free lives.

These authoritarian trends are sadly also present in the United States, where we witnessed an attempted insurrection in an effort to overturn a lawful election. For the first time, the United States has been labeled as a “backsliding democracy” — a wakeup call for all of us, and one with even more saliency for those of us who came to this country seeking better, more free lives.

As a University, it is part of our mission to stand for democratic norms of free expression and free inquiry — and to stand with those here and around the world who are seeking it for themselves and their communities. And while we may be limited in how we can directly influence events overseas, we can educate ourselves on the issues, avoid sharing misinformation and make our support for democratic values and countries known.

Text on this page created by UW Libraries is licensed under a CC BY-NC 4.0 license.
Images and video are not included.